WHAT IS ENDURANCE AND ITS TYPES

What is endurance and its types – Endurance is the ability to resist fatigue for a long duration. Matweyew in 1981 and Martin in 1979 have used the concept of “ability” to resist fatigue for defining “endurance”.Endurance is the ability of the conditions that occur under fatigue and the ability and merit of movement along with sports movements or ability to do sports movement, with the desired quality and speed, under the condition of fatigue. Endurance is the product of all psychic and physical systems and organs.  Good endurance establish a high quality of movement execution that detect expression in precision, accuracy, consistency, and rhythm, etc. endurance training result in the refinement of the functioning of various system and organs of the body. Endurance activity has been found to be a very high value of maintenance of good organic health, for increasing the general resistance against infection, and for cure and treatment of various diseases and metabolic disorders. Endurance also helps in preventive and curative effects on the human body like diabetes, blood pressure, and cardiac disorder, immune system, etc.

In the field of sports, endurance directly or indirectly involved with the high performance in all sports and games. It is said that endurance is the ability which the player uses without fatigue and to quickly return from fatigue and after the action to influence the actions of the game.

what is endurance and its types- Usually, there are two types of muscle fiber in the body, RED MUSCLE FIBER which we also call SLOW TWITCH FIBER, and WHITE MUSCLE FIBER which we also call FAST WHICH FIBER. For a person whose body has a high number of red muscle fibers, their endurance capacity is quite high. The person who has whiter muscle fiber, their speed endurance ability is better, so it is said that sprinter is born. It is more important to have red muscle fiber inside the endurance athletes so that any activity can continue for a long time but also in a state of fatigue.

WHAT ARE THE TYPES OF ENDURANCE?

IT IS BASICALLY CLASSIFIED INTO TWO TYPES:-

ENDURANCE ON THE BASIS OF NATURE OF ACTIVITY

It is the ability of an individual to perform an activity or movement involving a large number of muscles at a slow pace for a long duration. This type of endurance works in the body for a long time. Basic endurance is also known as AEROBIC ENDURANCE [complete supply of oxygen] and generally requires by every individual. The activity is consisting of 30 minutes or more than 30 minutes. In basic endurance volume is high and intensity is low. Heart rate is between 70-140 bpm [heartbeat per minute] and the quality of movement is slow and continuous. Example like jogging, swimming, etc

The ability to resist fatigue by performing particular sports activities is called specific endurance. The nature of fatigue is different in all sports and the specific endurance is also different. In typical endurance, long-distance runners try to cover the distance in the shortest possible time. These types of activity consisting will be less than 30 minutes because it includes various movement with different intensity. The intensity and volume of workload depend on the activity like for sprinter and basketball player intensity and volume is different and the quality of movement can be slow, fast and continuous varies according to sports. Examples like- hockey, sprinter, cyclic sports, etc.

During the competition, the player feels more tired because the mentality is different during practice and the actual match, such a condition when the player is active even in the state of fatigue, then it is called competitive endurance.

ENDURANCE ON THE BASIS OF DURATION OF ACTIVITY

Speed ​​endurance is the ability to resist fatigue in the last 45 seconds at the time of Activity. These types of actions are characterized by that they work from low to maximum speed. As a priority, it depends on strength and competence. Heart rate is 180 +. In these types of activity, energy is produced by the ATP-PC system. It leads to the formation of lactic acid in the body because speed endurance activity is also called ANAEROBIC ENDURANCE [incomplete supply of oxygen]. For example 100 meter sprints, pole vault, etc.

Short-term endurance requires a duration of the last 45 seconds to 2 minutes of action to resist fatigue. Heart rate is 180 +bpm. Short-term endurance depends on strength endurance and speeds endurance. In these types of activities, energy is produced by the combination of glycolysis and oxidation. For example 1500 and 800-meter running event.

middle term endurance activity requires 2 to 11 minutes. The middle term endurance depends on the aerobic converting process. As time progresses, the contribution of the aerobic process also increases. Like short-term endurance, it also depends to a lesser degree on strength endurance and speeds endurance. Heart rate is between- 150 to 170 bpm. In this activity, energy comes from both glycolysis and the oxidation energy system. For example 3000 meter and staple chase event.

The long-time endurance action takes more than 11 minutes to last. Heart rate is between 140 to 150 bpm. Long-term endurance depends on the changed form. In these types of activity, the energy is coming from the oxidation of glycogen. For example- Basketball match and marathon.

what is endurance and its types

In this training Method, one exercises for a long duration without giving any break in between the exercises. In this type of exercise, the duration of work is more and the intensity is less. The continuous method is divided into Three types are given below-

In the slow continuous method, the athlete exercises at a slow pace without giving any break or pause for a very long duration. Marathon and cross country runs are typically an example of the slow continuous method. The heart rate for a trained sports person should range from 140 to 160 beats per minute. The duration of exercise should not be less than 30 minutes and the last up to two hours or even more. Slow continuous exercise the most important changes in muscle glycogen and liver glycogen increase in capillarization, increase in the number and size of Mitochondria and improvement in movement economy, etc. it has also a positive effect on heart and lungs, slow continuous method, however, result in a decrease in muscles size and strength. The activities involved in it are running, walking, long cross country.

In the fast continuous method, work is done at a faster speed without changing the pace for a long duration without taking any break in between the exercise. The duration of Exercise should not be less than 20 minutes for a well-trained athlete. The heart rate is in the normal range between 160 to 180 beats per minute. The fast continuous method due to higher intensity is more strenuous and exhaustive. The exercise should be done of about 170 -180 beats per minute for the best result i.e. 90-100% of vo2 to the maximum.  The fast pace method is very effective for improving the vo2 to the maximum. The fast continuous method has a positive effect on aerobic capacity. This method also doesn’t lead to much decrease in size and strength of muscle.

in the variable pace method exercise is done continuously but with changes in the pace of training like it is a combination of both slow continuous method and fast continuous method. The duration of exercise is 15 minutes to one hour. The heart ranges between 140-180 beats per minute. This method helps to improve in anaerobic and aerobic capacity of an individual.

It is a type of running training developed in Sweden by GOSTA HOLMER in 1930 FARTLEK is a Swedish word that means SPEED PLAY it is a variation of the variable pace method. Its types of cross-country running usually conducted over a hilly region. Along with running some exercises may also be included in this type of training. The exercises like frog jumping, hopping on one leg, shuttle run, jumping jack, maybe also is included in this type of training. Fartlek the change of speed is not preplanned. The athlete changes the speed on his own during the activity, in accordance with the terrain, surroundings, and feeling. Fartlek’s training method is a pre-competition training method but it is very helpful in developing physical factors like strength and endurance in an athlete. The training period may vary from 20 minutes to 60 minutes. The heart rate ranges between 140-180 beats per minute.

What is the Importance of fartlek training?

what is endurance and its types

The Interval training method is very useful for a player who runs the track event. This type of training gives some time for recovery between repetitions, or incomplete recovery between two repetitions.  The basic principle is based on effort and recovery. This means, during training, runner, in between specified workout, some recovery period is given or interval is given during which runner recovers. In interval training the pulse rate increases, blood pressure is also increased and accumulation of waste products such as lactic acid and co2, etc. The effect of the interval training method is determined by the interval

what is endurance and its types- According to the intensity, it has been divided into two parts:-

In the extensive training interval training method the intensity is from 60-80% means there is the dominance of volume. In this method, the general endurance and strength of athletes are developed. This training should be done in the pre-competition period. The number of repetitions should be more as the intensity of the repetition is less. It is a quantity base method.

IN the intensive training method the intensity is from 80-90% means the dominance of intensity. This method is used generally for the development of athletes’ speed endurance, explosive strength, strength endurance, and maximum strength. This training can also be tried when the competition is closer and preparation timeless. Pulse rate is 170-180 beats per minute and recovery rate up to 120-140 beats per minute. It is a quality base method.

This method has intensity up to 90–100% while complete recovery between two repetitions is an increase in all types of speed ability. This method is used especially to increase specific endurance and anaerobic capacity.

what is endurance and its types?

Read more about- strength and its types 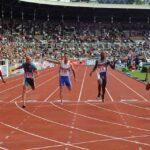 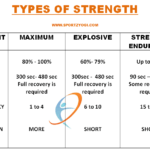 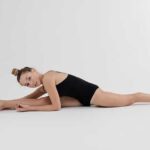 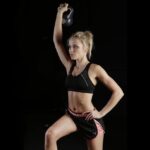 3 thoughts on “What is endurance and its types”