Physiology of respiration- Respiration is a physical process by which a living organism takes oxygen from the surrounding medium and emits carbon-di-oxide, and waste is the product of this process, which is sometimes called cellular respiration.

Oxygen is supplied to the tissues and their co2 is removed by the combined action of the cardiovascular and respiratory systems. Respiration includes the movement of air INTO and OUT OF the air and blood, the transport of gases in the blood, and the exchange of gases between the blood and tissues.

In the Physiology of respiration, During inspiration, both the intercostals muscles and the diaphragm, stimulated by nerves, contract simultaneously, increasing the volume of the thoracic cavity and expanding to fill this enlarged void. Due to their expansion, the pressure in the air passages and the air sacs [alveoli] in the lungs becomes less than the pressure of the external atmospheric air, due to which the external atmospheric air is drawn into the air sacs and enters the alveoli of the lungs because through this the external air is pulled inside the lungs this action is called Inspiration.

In the Physiology of respiration, Expiration is a passive process. Inhalation requires muscular effort, thus burning calories and ATP. Expiration is due to relaxation of the diaphragm and external intercostals muscular that, because of elastic recoil, return to their original position when this occurs, air pressure is increased inside the lungs than outside the body, and air leaves the lungs. To force a deeper expiration, the internal intercostal muscles contract and depress the ribs.

Both the above actions are self-induced actions, their sequence continues throughout life. Therefore, the activities of inspiration and expiration continue throughout life without any hindrance. The rate of respiration is 16 to 19 per minute in adults. The rate is higher in children. If these activities are interrupted due to any reason then there is a danger of ending life.

EXCHANGE OF GASES IN  PHYSIOLOGY OF RESPIRATION

Gaseous exchange in the body According to the law of physics, air flows from high pressure to low pressure, external respiration in the body takes place between the alveoli [air sacs] of the lungs and the blood cells around it.

In the body, internal respiration takes place between blood cells and tissues. During breathing, the air inhaled along with the breath in the body contains many gases like:-

This respiration takes place between blood cells and tissues. In this, by the diffusion of oxygen present in the air sacs by external respiration, the arteries get into the blood of the cells and some of the oxygen dissolves in the blood plasma and the rest of the oxygen gets combined with the hemoglobin, which is called oxy-hemoglobin.

Oxygenated blood reaches the left atrium of the heart through the pulmonary veins and reaches the left ventricle through the aorta and its branches and branches throughout the body. Gases are exchanged between cells and tissues in the body. The oxygen pressure in the tissues is less than that of the cells and the available oxygenated blood, due to which the exchange of oxygen takes place between the cells and the tissues by diffusion.[physiology of respiration] Oxygen present in the blood travels through the cell walls and reaches the tissues. The carbon dioxide present in the tissues, which is produced by the metabolism of carbohydrates and fats, dissolves in the blood vessels. In this way, internal respiration is completed by the gaseous exchange between blood cells and tissues.

The Physiology of respiration is regulated by two controls-

It is exerted by the respiratory center present in the medulla oblongata of the brain. From this center, afferent impulses pass to:-

These impulses cause rhythmic contraction of the diaphragm and intercostal muscles. Afferent nerve [messenger neurons] impulses arise due to the distention of air sacs. They are carried by the vagus nerve [longest nerve in the body] to the respiratory center.

Some chemoreceptors also regulate the respiration reflex. These receptors are present in:

These two bodies contain the ending of sensory nerves which run in vagus nerves. An increase in the carbon dioxide level of blood stimulates these bodies. The impulses are then carried to the respiratory center which is also stimulated.

CHEYNE-STOKES RESPIRATION- It is a form of periodic breathing in which groups of breaths are separated by a period of apnea. This occurs because the co2 tension of arterial blood is reduced to a very low level. So the respiratory center cannot be stimulated. Respiration starts again, only when the co2 tension increases. Cheyne-stokes breathing occurs in uremia, opium poisoning, and increased intracranial pressure.

APNEA– It is stopping respiration for short intervals.

HYPERPNEA– Increases in the depth of respiration

Dyspnea– It seems to difficulty in breathing

Polypnea– In this respiration characterized by the rapid rate

Tachypnea– In this exceedingly high rate of respiration.

Schafer Method and Holger Nialson Method- Both involve compression of the thoracic cavity by pressure against ribs.

Mouth To Mouth Method-It involves blowing air into the lungs through the mouth.

Rocking Method– This method is mostly used for children.

Instrumental Method– Basically these are the drinker’s method, Bragg-paul, and iron lung method. These methods can be carried out only in hospitals. 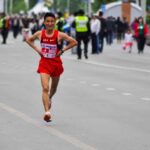