PATANJALI ASHTANGA YOGA– Yoga has a special place in today’s busy lifestyle so that physical and mental illnesses can be avoided to a large extent. Yoga is a system of soul-physical exercise, which establishes a reciprocal relationship between body and mind. Yoga empowers each person to control his inner mind.

There is a lot of difference between the yoga of the ancient era and the yoga of today, in the old times those people used do yoga, who were not interested in worldly life, or the sage used to go to a particular place to study yoga. In the present era, the notion of yoga practice has taken a new turn. Today’s yoga is not only limited to certain people but has become a matter of interest for every class of people.

Nowadays man does not work himself and does all the work setting by machines. The external and internal balance of our life is being eroded. Science has undoubtedly revolutionized the lifestyle of man, but the result has not been very good physically. Constant work does not give a person time to think about what is harmful to him, which is affecting his life, his future generations. Lack of manual labor, more food, balanced food, more work, wrong habits, luxurious life, etc. is some such things, which have given birth in modern life. In spite of all the comforts and facilities in modern life, the human physical and mental condition is deteriorating day by day. Therefore, there will be no exaggeration in saying that yoga is necessary for a person to be healthy.

MAHARISHI PATANJALI has said in his “YOGA SUTRA” that “Yoga is the state where anyone is free from worries and the mind is completely transformed”. Both body and soul play an important role in the transformation from the beginning to the eternal. For this reason, it is the key to achieving worldly secrets. Human rugs can implement their personality by contemplating rhythmic breathing, concentration, and contemplation. Therefore, yoga is not only the science of different physical postures, but it is a source of one and two complete health and on the other hand, it also keeps the mind calm. Regular practice not only increases the age but also leads to a meaningful life of yoga.

To study in detail Pranayama, first of all, it is necessary to have knowledge of the types of yoga; Because Pranayama is based on these.

According to Maharishi Patanjali, there are eight parts of Ashtanga Yoga practice, in which after attaining proficiency, any person can establish a relationship with God. To go into this state it is necessary to follow two conditions – PRACTICE AND FREEDOM FROM DESIRES. With regular practice, one can keep one’s mind steady. For this, different methods can be adapted according to their nature.

The eight limbs of yoga are as follows

The first stage of Ashtanga Yoga- which means self-control. By using it, life can be made MORAL and DIVINE. This makes it easier for a person to understand the difference between good and bad, along with having a happy life. Or removes evil actions from the mind and infuses new energy into the body.

There are eight types of YAMA–

AHINSA [NON-VIOLENCE] – Means not to hurt a person through mind, action, and speech. Actually, treating each person as equal is called non-violence. The person who walks on this path and lives his life is a true yogi [devotee].

TRUTH– A person who always walks on the path of truth has a painful life, but he does get success at some time or the other. Truth is considered the basic basis of social behavior. The person speaking the truth is courageous and bold.

ASTEYA [NON-STEALING] – Not establishing one’s authority over something, no greed for money, no stealing, no ownership of one’s property, etc. are the forms of ASTEYA.

BRAHMACHARYA [CELIBACY] – Keeping the mind under control is called Brahmacharya [CELIBACY]. Only a person who offers everything at the feet of God can follow celibacy.

APARIGRAHA [RENUCIATION] – Not to covet anything is called aparigraha, such as not making an unnecessary collection of pleasures, not collecting money for selfishness, consuming the objects of consumption, etc. A person who does not allow greed in his mind is a true yogi.

ANUGRAH [GRACE] – A person who has compassion for all beings is called grace.

FORGIVENESS – To tolerate all behavior at any time, which gives respect or trouble, is called forgiveness.

DHRITI [PERSISTENCE]-  The person who keeps the mind the same even after suffering, disconnection, and loss of money, is called Dhriti.

The second stage of Ashtanga Yoga– NIYAM [rules]. If seekers control their senses and do spiritual practice, then surely there is a success. Individual religion is considered to be the main basis of rules. This makes it easy to prove rugs.

The five types of NIYAM [rules] are as follows:-

SHAUCH [DEFECATION] – Both the human body and mind remain clean through routine work. The seeker must have external and internal purification. For external purification, it is important to regularly perform bowel movements, bathe, wear clean clothes, take the right food and clean the house. On the contrary, there should not be jealousy, malice, and greed, etc. in mind for internal purification. Apart from this, the seeker should also do some yogic actions, such as

NAULI [Nauli is one of the kriyas or shatkarmas, preliminary purifications, used in yoga], DHAUTI [It is intended mainly to the cleaning of the digestive tract in its full length but it affects also the respiratory tract, external ears, and eyes], BASTI, etc. Only by walking on the path of truth can a seeker become a complete yogi. Therefore, to get happiness, internal and external purification is necessary.

The third stage of Ashtanga Yoga – Asan. Asana means to mold the body in different types of situations to keep it healthy. By continuously practicing each position, the sleeping powers of various organs within the body are awakened.

Asanas are used not only for the purpose of yoga practice but also to remove health-related disorders. Many actions are made useful to the public by changing something. Nowadays Yoga practice is not only done individually but also by organizing classes collectively. There are many types of asanas, but up to the main point of pranayama, the five asanas have special significance – Siddhasana  [Accomplished Pose], Padmasana, Sukhaasana, Vajrasana, and Shavasana. Only after practicing these asanas is their facility while doing pranayama.

The fourth stage of Ashtanga Yoga – Pranayama. The process of controlling the breaths is called Pranayama. For Pranayama, the breathing action must be rhythmic in one flow. The process of filling the air in the lungs and releasing air is done by pulling the breath. It is an action that looks easy to see, but it has a profound effect on the body. It should be done only by staying in the company of a yoga guru.

The fifth stage of Ashtanga Yoga – Pratyahara. When a person is successful in removing the mind from external activities, only to stabilize the inner point, that is, the mind is fully concentrated, then it should be understood that his pratyahara is finished. According to Maharishi Patanjali – the process of concentrating the powers of the mind and preventing them from going to external subjects is called pratyahara [withdrawal of the senses]. A yogi should live a simple, simple, and restrained life.

The sixth stage of Ashtanga Yoga – Dharana. According to the scriptures, the process of converting thinking power towards conscience is called perception. In other words, if our mind is fixed and tied to one place, then it is called perception. The seeker should put his mind in the idol or intended place of the Lord. One must practice pranayama, asana, and pratyahara to focus the mind on one place. Only by doing this can the seeker move towards the actual yoga path.

The seventh stage of Ashtanga Yoga – Meditation. Meditation plays an important role in yoga practice. The state of Samadhi can be attained only by meditation. The path of spiritual or divine eyes of the seeker can be opened only by meditation. For the enjoyment of worldly ailments and karma, one should be free from the incident of dying at birth in different dimensions, while realizing the ultimate power, while living; a person can make his birth meaningful. If during the meditation, the incarnation of the mind continues to emerge with the same effect and there are no deviations in the middle, then the cultivation of the seeker is considered successful.

The eighth stage of Ashtanga Yoga – Samadhi. When the seeker is engrossed in the meditation of God, forgetting his shape type and concentrating, then it is called the state of Samadhi.

To get into the state of Samadhi, a seeker has to work hard. He has to overcome many difficulties like sickness, consciousness, relaxation in mind, grief, sacrifice, anger, etc. If he manages to keep his mind in one place, his penance will be considered successful; otherwise, his path will be filled with difficulties.

If a human being is determined to cross the obstacles that come in the way, then only the state of Samadhi can be attained, otherwise not. If any person successfully crosses all the stages of Ashtanga Yoga, then he can save himself and society by becoming a great yogi. 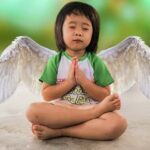 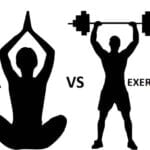 Major difference between yoga and exercise 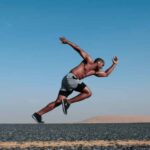