DIFFERENT TYPES OF VITAMINS, AND ITS FUNCTIONS, SOURCE, DEFICIENCY ETC

Vitamin A is found in many forms like retinol, retinal and retinoic acid, etc. All these forms can be called vitamin A. Vitamin A in its pure form is a mixture of rivets, whose color is light yellow. It is naturally found in animals. It can dissolve in fat or in a mixture containing fat solvent, but cannot dissolve in water. It is relatively stable in heat, acid, and alkali. It is easily oxidized and is destroyed by precipitate by trans-violet radiation.

The basic source of all types of vitamins is carotene, which is synthesized in plants. Both animals and humans get some vitamin A from their food. Carotene is also ruddy, but its color is dark red. These are called early forms of vitamin A. Carotene’s alpha, beta, and gamma molecules have great importance in a nutritious diet. Beta carotene is converted into vitamin A retinol in the body.

FUNCTIONS OF VITAMIN A

Vitamin A is necessary for easy viewing in low light. There are two types of cells in the retina -Rhodes, and cones, of which Rhodes helps in seeing less light and cones in bright light. Rhodopsin present in Rhodes is made from a combination of a type of protein and vitamin a. Rhodopsin decomposes into elements in bright light, and in low light, these elements combine with vitamin A and protein to form rhodopsin.

FOOD SOURCES OF VITAMIN A

This is also found in butter, cheese, and egg yolk. Vitamin A is not found in the food found in plants, but its initial form is carotene in all such plants. Vitamin A is found in every plant whose leaf green and yellow in color. The greenery of plant leaf depends on the amount of carotene obtained in it.

The proposed quantity of vitamin A for adults is 600 micrograms. This requirement is 4800 micrograms as beta carotene. Minor formulas are used to interchange beta-carotene and retinol.

If the diet contains both retinol and beta carotene, then the amount of vitamin A is extracted in the following way

DISEASE DUE TO DEFICIENCY OF VITAMIN A

Vitamin D was discovered in the 1930s as a clarified substance, it is called calciferol, it is also called anti-rickets.

Vitamin D is a group of sterol mixtures that contain resistant substances. Of these, only two are related to nutritional science – vitamin d2 or ergocalciferol is found in plants. Vitamin D3 or cholecalciferol is found in animal cells and is formed as a result of action on 7 dehydrocholesterol present in the skin of ultraviolet light. Pure vitamin D is a blended mixture. It is soluble in fat and fat legislators, but it cannot dissolve in water. They are stable in heat, alkali, and oxygen. Different types of vitamins

200 IU of vitamin D, is considered essential for the body, the deficiency of this vitamin can be met if the body remains in the sun for some time every day.

DISEASE DUE TO DEFICIENCY OF VITAMIN D

Ewan and Bishop have proposed that a fat-soluble substance is required for breeding in mice. They proved that the lack of vitamin E in this element means that fertility in mice is lost. Hence, it is also called Antistereality vitamin.

Vitamin E is contained in certain chemical elements, called tocopherols. Alpha-tocopherol is a mixture that contains the most vitamins E. This vitamin is not destroyed in high temperature and alkali, but in the presence of sour fat, lead, iron salts, it starts oxidizing. Similarly, in the presence of ultraviolet light, alkali, and oxygen, it starts decomposing.

0.8 milligrams of vitamin E per gram of unsaturated fatty acids can be fixed according to need. By taking vegetable oil and vegetation in our food, our body gets a sufficient amount of Vitamin E.

DISEASE DUE TO DEFICIENCY OF VITAMIN D

Hendrix Dam 1935 discovered that mice can be saved from dying in case of heavy bleeding when their blood has the maximum freezing properties. This property is possible with a sufficient amount of vitamin k, so it is also called an antihemorrhagic vitamin.

In nature, vitamin k is found in two forms k-1 alpha, in alpha, and k-2 is synthesized by microorganisms. It is fat-soluble. It is not destroyed by heat but is destroyed by alkali, strong acid oxidation, and light.

Vitamin K is mainly found in plants. It is found in abundance in the leaves of vegetables like spinach, cabbage, cauliflower. It is found in small quantities in cereals, fruits, and other vegetables. Pig liver is the main source of animal food.

It is not possible to propose anything about its daily intake due to the synthesis in the intestine and the diversity in the food. There is no problem with the lack of vitamin K in food.

DISEASE DUE TO DEFICIENCY VITAMIN K

Thiamine is also called ANTI BERI-BERI VITAMIN. It was synthesized in 1936 Beri-beri disease was seen in countries where 80% of the diet was rice. In countries such as Indonesia, doctors found that full treatment of beriberi can be done by feeding rice bran extract. It has been found that there is an element in rice bran that is removed during milling; it is helpful in preventing BERI-BERI. This element was identified as thiamine.

Thiamine hydrochloride is a white ribbed element. It has a mild yeast smell and tastes like a salty kernel. It dissolves in the water soon, but it does not dissolve in fat solvents. It is quickly destroyed by heating in a normal or alkaline solution. In an acidic medium, it can remain stable at 120 ° C.

FUNCTION OF VITAMIN B

FOOD SOURCE OF VITAMIN B

DISEASE DUE TO DEFICIENCY VITAMIN B

Lack of thiamine causes beriberi and Wernick’s encephalopathy. Beri-beri is found in three forms, dry, moist and infertile. There is a slight loss of appetite, the ankle and knee turn, causing discomfort and sensation. The three forms of Beri-beri are as follows-

Inflammation is its main symptom. It grows very fast and is visible in the abdomen, in addition to the feet, and also in the face. You experience nervousness and difficulty in breathing. Swelling and stiffness are seen in the muscles of the calf. Diastolic blood pressure decreases and systolic increases. The rate of pulse increases, the heart becomes weak and heart failure dies.

The initial symptoms are the same as the wet stomach. Constant loss of muscles and increasing weakness makes it difficult to walk and wood has to be used to stand and walk. Finally, you have to stay in bed, death can also happen.

Lack of thiamine in breast milk is seen in infants dependent on breast milk. It is more widespread in Southeast Asian countries, where polished rice is used in the diet leading to a deficiency of thiamine.

VITAMIN B2 AND RIBOFLAVIN

This vitamin is sour in taste, orange in color, and odorless. And its raves are -like needles. It dissolves somewhat less in water and a yellow aura appears for the green element from it. It remains the same when it is boiled in acid, but if it is put in an alkali solution, kept on heat, then it starts to disintegrate soon. It also gets destroyed in light.

FUNCTION OF VITAMIN B2

FOOD SOURCE OF VITAMIN B2

It is most commonly obtained from dried yeast. It is also found in good quantity in milk, liver, meat, eggs, and green vegetables. It is obtained in sufficient quantity from lentils, grains, and fermented substances.

DISEASE DUE TO DEFICIENCY VITAMIN B2

Its deficiency condition is called Ariboflavinosis. Its symptoms are such as tearing of the corners of the mouth, reddening of the lips, cheilosis, reddening of the jib, redness of the eye, and experiencing a burning sensation, swelling in the genitals, etc.

It is found as a white, pungent flavored rave. It dissolves normally in hot water but only in small amounts in cold water. It is stable in heat, alkali, acid, light, and oxidation. In fact, it is the most permanent vitamin. Niacin is found in two forms Niacin and the preceding Niacin ie Tryptophan. In the human body, 1.0 mg of the vitamin is obtained from 50 to 70 mg tryptophan. Therefore, if there is a large amount of tryptophan in any food, then a sufficient amount of niacin is obtained in that food, no matter how low the niacin is in that food.

Its daily required quantity is up to 6.5 mg/kcal.

DISEASE DUE TO DEFICIENCY VITAMIN NIACIN

There are three main symptoms of the disease-

Vitamin C is a white-colored mixture. It has a relatively simple structure and is closely related to mono-monosaccharide’s sugars. It is prepared by mixing glucose at a low cost. Vitamin C is destroyed sooner than other vitamins; it is destroyed soon by water, light, alkali, and oxidizing enzymes. It is often destroyed in storage, processing, and cooking.

This vitamin predominantly; comes from fruits and vegetables. It is found in abundance in lemon, grape, watermelon, pineapple, guava, pear, green vegetables. It does not occur in dry beans at all, but when seedlings come out, then it is found 7 times more. Milk, eggs, meat do not have this at all. Ascorbic acid in mother’s milk is 4 to 6 times that of animal milk, which protects the baby from scurvy.

DISEASE DUE TO DEFICIENCY VITAMIN C 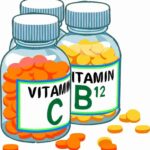 What are the micronutrients

1 thought on “Different types of vitamins”