DIFFERENT TYPES OF PASSES IN BASKETBALL

Basically, a pass includes a step, a wrist and finger snap, and a follow-through. Throughout the passing action, the player maintains the shoulder, hips, and knees in a loose and relaxed position. Bodyweight shifts from the rear foot to the front foot, while the accuracy of the pass is helped by using the small muscles of the fingers and thumbs. The player drops the hips slightly; bends the knees to ensure relaxation and balance, then extends the knees as the ball is released. The force-directed behind the ball is released. The force-directed behind the arm and shoulder muscles controls the appropriate distance.

When you have the ball, try to assess each situation as it develops, considering the following:

DIFFERENT TYPES OF PASSES IN BASKETBALL:

The passes which are executed by one hand passes are classified into:-

This is a pass used in the open court especially off a rebound for distance. The baseball pass is the most successful pass for initiating a fast break but a difficult pass in which to control accuracy most players discover it to be a natural way of throwing a medium or long-range pass.

The passes which are executed by two hands, Again two handpasses are classified into:-

CHEST PASS: – The Chest Pass is a two-hand pass used when there is no obstacle between passer and receiver. It is, therefore, usually a perimeter pass, guard to guard or guard to forward. The Chest pass is considered the basic pass of basketball. It is a snappy, chest-high pass that travels for a distance of 15 to 20 feet in a plane parallel to the floor.

TWO HAND BOUNCE PASS: – It is called a Bounce pass because there is a bounce on the ground before it could be received by the receiver. The bounce will be at a distance of 2/3 from the passer. The two hand bounce pass although expedient in-game situations have a tendency to be slow. Although a player may import substantial force to the pass, the speed of the ball is greatly reduced the moment it contacts the floor. The slowness of the bounce pass, as well as the possibility of passing too far from the receiver, increases the chances of interception.

TWO HAND OVERHEAD PASS: – When this pass is applied carefully and strategically, it is difficult to intercept. The ball is thrown directly overhead or from slightly behind the head and passed to the receiver at shoulder level.

Receiving with both hands

Usually one moves toward the oncoming ball with one’s body and arms from the basic stance. When the fingertips touch the ball, the arms and the upper part of the body flex, and the impact of the ball is cushioned.

The fingers are spread and they hold the ball in such a way that the thumbs and forefingers of both hands are positioned opposite each other and are clearly behind the ball. Right from the beginning, it must be kept in mind that the ball lies on the fingers and the roots of the fingers and does not touch the whole palm of the hand. In receiving balls that arrive from the side or over the head, the cushioning of the ball is executed by a short springy movement of the stretched arms and the upper part of the body, and consequently, the movement is shorter and harder. Therefore, the elasticity of the fingers becomes essential. Only when the ball is securely gripped it is pulled to the body.

ORIGIN AND DEVELOPMENT OF BASKETBALL 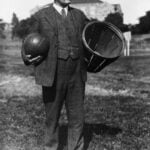 3 thoughts on “Different types of passes in basketball”